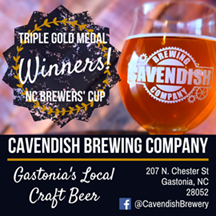 Several local bands are set to hit the stage beginning at 7pm with "The Menders" headlining.

For more information about Cavendish Brewing Company, see below for a recent highlight from the Gaston Gazette, or visit their Facebook page:

After more than four years of brewing beers and canning them one at a time, Scott Cavendish has added a canning machine that will make the process at Cavendish Brewing Co. 10 times faster.

Workers will go from a canning capacity of just 300 beers per day to more than 3,000 beers in a day, said Cavendish.

Cavendish Brewing Co. sent its first run of Cowboy Water American Light Lager through the canning line, and then through labeling and then into the hands of customers last month.

"It's the first beer to go through the canning machine and we're all set up to can 150 cases of beer with our inaugural run," said Cavendish.

Cavendish had a mountain of 6,000 aluminum cans on hand ready to be filled with North Carolina craft beer.

"During COVID, we canned 30,000 cans of beer one can at a time on a crowler machine," said Cavendish.

A can version of a growler, a crowler makes beer easy to can and go. But the process can be hard on workers who filled beers up until the point they could hardly move their hands, Cavendish said.

"It was either buy a machine or everybody's going to quit," he joked.

The machine cost Cavendish $40,000. He described it as being super advanced with sensors everywhere, adding it can purge the can of carbon dioxide, a process that helps the beer stay fresher in the can longer. The machine also rinses the exterior of the can both before and after contents are added, Cavendish said.

Cavendish Brewing Co. found itself with no customers during parts of the pandemic. Without customers in the taproom of the establishment, located at the intersection of U.S. 321 and Long Avenue, the brewery lost 80% of its business.

"And then the other 20% was selling kegs to bars which were now all closed and none of them bought beer," said Cavendish.

The new canning machine brings exciting prospects to the brewery. When staff was filling cans by hand it was a slow process and cost $1 of labor for every single can filled, Cavendish said.

"If you think about every case with $24 of labor to can it, you can't sell the cases for much more than that," said Cavendish.

Cavendish's brews will now make their way to various other establishments. Cavendish said he already had orders for 40 cases of the cans. The beer will be distributed in Gastonia as well as Charlotte.

"If you buy our local beer most of it goes right here into Gastonia," he said.

Though he may be biased, Cavendish said the best beer in town comes from Cavendish Brewing Co. The brewery has won nine gold medals for its beers in the past.